The consolidation of a festival in only two editions Alicia Serrano More than two years ago now, in February 2019, the UMBRA Light Festival was inaugurated in Vitoria. That was its first edition and it was a success that seemed to be destined to be repeated a year later. But 2020 arrived and, with it, […]
Read News
12.31.2021
By Adadi
Categories: Uncategorized

The consolidation of a festival in only two editions

More than two years ago now, in February 2019, the UMBRA Light Festival was inaugurated in Vitoria. That was its first edition and it was a success that seemed to be destined to be repeated a year later. But 2020 arrived and, with it, a new reality marked by COVID19. Against the backdrop of a pandemic that has led to a global health crisis, it was, of course, impossible to hold such an event… so UMBRA had to lie dormant and wait for better times to come.

And so it did: the management of this festival (ARGIA 3 Cultural Association) did not give up, waited patiently for the right moment and took advantage of that extra time of unsolicited organization to rethink the festival with perspective and, thus, to refine its proposal. And so we arrived at November 12, 2021, when this long-awaited second edition could finally be inaugurated. The months that had passed until then had been a time of latency and this was conveyed, in poetic terms, by the organizers of the UMBRA Light Festival.

At the Quiosco de la Música in Parque de la Florida, a piece understood as a seed that, hibernating, had been waiting for the moment to germinate and blossom, was exhibited. I’m talking about the piece “Neon’s Band: “Reborn””, created by Studio & Light; a work that acted as a direct echo of that one presented by the same studio in the first edition of 2019 (“Reborn”). A wink that, as indicated in the program of UMBRA 2021, proposed: “to look for that positive memory of social cohesion that was the first edition of the festival, to be reborn and free ourselves from recent times and, through an already present image of our past, to present ourselves with a new spirit”. The second edition, therefore, took place in an ambivalent mood. On the one hand, it was clear that the idea of continuing to work on the guidelines set out in that first edition was clear, with the intention of consolidating the festival while maintaining a quality proposal as a key to success.

And on the other hand, that “new spirit” was present: to approach the festival from a renewed attitude, in which the story does not lose the poetics of that first encounter but (perhaps) becomes more reflective. The slogan of this second edition, “We want you to shine!” illuminated the facade of the Villa Suso building throughout the three days of the festival. In this way, directly addressing the visitor, it reminded him that (after dark times) light was coming to the city. A happy and brilliant moment, which was being generated in the first person: that of the non-transferable experience of the man or woman who, during those three days, actively wandered through the streets of Vitoria, perceiving them from new perspectives thanks to the light pieces that, during that weekend, transformed their spaces. But that other look that we have talked about previously, made the festival also turned its visitors into possible agents of change through a call for reflection.

Some of the pieces on display alluded, directly or indirectly, to the Sustainable Development Goals (SDGs) set out in the 2030 Agenda created by the United Nations.

Examples of this were proposals such as “Ants”, by Colectivo 3 Lab Lights or “¡Toma tu lugar!” by Rodrigo Lavayol, the latter being the result of another of the novelties of this edition: the call for the participation of emerging artists that was launched during the months of confinement through the “Call for young artists”.

Perhaps the work that best staged this renewed attitude present in the 2nd edition of UMBRA was, precisely, the one that kicked off the festival: “Expedición Nautilus”, the result of an interesting collaboration between the illustrator Coaner Codina and Estudio dLux, with Emilio Valenzuela (AAI partner and co-founder of Estudio dLux) actively participating in the project. A piece in which the Plaza de la Virgen Blanca was immersed in oceans of light and color generated through Codina’s illustrations. The result was an immersive experience for the visitor in which there was not only a sensory and visual transformation of the space. By including the public in the piece, it also re-situated them as active agents of change in the face of the negative and devastating impact that human activity is having on the oceans. A remarkable quality, which has been evident in the two editions of this festival developed to date, is the curatorial line established in the selection of the works to be part of it. By placing the visitor at the center, it offers him the possibility of discovering works of international character that, being all of them quality proposals, present some of the diverse creative possibilities that we can find in the world of Light Art. In this second edition, the public could enjoy “Video Mapping” pieces, such as “Pneuma” by MOMAP studio (projected in the Plaza de la Provincia); light sculptures such as “Les Voyageurs” by Cédric Le Borgne (located around the Basque Parliament);

immersive installations in highly symbolic buildings such as “Miradas”, the proposal of Carlos Torrijos (Vice President of AAI) for the interior space of the Cathedral of Santa María; and lighting installations such as “Order 200”, the work of Emilien Guesnard that was located in the Escoriaza-Esquivel Palace or the very remarkable “Estados alterados de Tempo”, created by LEDSCONTROL (whose Project Manager is our partner Miquel Clot) and presented in the Plaza de los Fueros. And, among the various types of art-light interactions that could be enjoyed throughout the festival, perhaps one of the most surprising and interesting proposals was “(((Graffphonica))) )” presented by SUSO33.

In front of this piece, the visitor could experience the magic of live creation through the strokes of this artist (an international graffiti figure), which were transformed in real time into beams of light, color and sound.

This was a scenographic proposal that, in a way, transported you to the modus operandi of the great American expressionist painters; in each show, SUSO33 introduced her body, gestures and movement inside a large canvas that (projected on the façade of the Artium Museum) was a living piece in constant transformation in front of the attentive gaze of the audience. However, it is now time to turn our attention to other details as well. When it comes to enjoying a visit to a festival of this type, there are many factors to value and take into account. And one of the most important, perhaps, is space management. In this sense, UMBRA stands out for having been able to promote an intelligent synergy between the urban spaces inhabited by its pieces and the routes generated between them. One of the points defended by the organization of this festival is that it is not only important to work with the works and the artists, it is also important to be aware of the urban space and the interrelationships that are woven between it, the public and the participating pieces. If in its first edition the festival focused mainly on the historic center area, this year its works have been colonizing new urban spaces that are somewhat more peripheral but

Inhabiting these other spaces of the city (green areas, which invite to stroll), allows for

decongesting the center and, thus, improving the visitor’s experience, which can enjoy

the different pieces of the festival without being crowded, crowded or overly crowded.

Based on this management of spaces, in this 2nd edition of UMBRA, if in the almond-shaped

In Vitoria, we found such spectacular pieces as “Icesky”, a work with the

that our partner Ezequiel Nobili, intervened luminously the Medieval Refrigerator of the city.

(a heritage element from the 11th century); leaving this more central environment, we can find

All in all, we see that the wait has not disappointed. Thanks to the care with which this second edition has been curated and organized,

UMBRA Light Festival has managed to present a quality proposal that has not only achieved an important success with the public; it has also ensured that, despite its youth (with only two editions under its belt), this festival is beginning to gain a foothold both nationally and internationally.

The Organizing Committee of the Max Awards for the Performing Arts announced the candidates for the XXV edition of these awards organized by the SGAE. A total of 179 of the 449 shows entered in the competition have been selected to participate as candidates in the XXV... 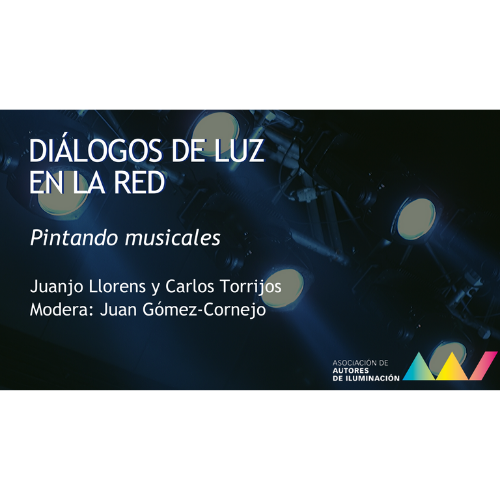 DIALOGUES OF LIGHT ON THE NET I – “Painting musicals”.

Activities, Dialogues of Light on the web, Uncategorized

The designers Juanjo Llorens and Carlos Torrijos will share their knowledge about lighting design and lighting around the world of Musicals. We will be able to meet on the screen and chat about our relationship with light in the musical. Details Date:April 24, 2020...

XVIII ENCOUNTER OF LIGHT with the Lighting Designer Jonay Díaz at the celebration of the Carnival of Las Palmas de Gran Canaria on February 23rd.

The Association of Authors of Illumination would like to invite you to share with us the XVIII Meeting of Light that comes from the hand of our partner and Lighting Designer, Jonay Díaz with the scenography of Xhoxb and the Artistic Direction of Israel Reyes . A...