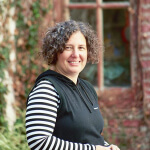 Architect, graduated in 1983 from the University of Buenos Aires, and National Professor of Engraving and Drawing, graduated in 1983 from the National School of Fine Arts “Prilidiano Pueyrredón”.
From 1990 to date he has worked independently in lighting design for architecture as well as for shows (theatre, opera and dance) and events for companies.
He has been teaching at the U.B.A. since 1984. She has worked as a temporary assistant professor and by competition in Morphology, Graphic Design career, and at the University of Belgrano as a professor in Form and Communication, in the same career. She is currently a professor of the subject “Lighting Design” at the Faculty of Architecture of the University of Buenos Aires and of several subjects in the career “Lighting Design for Shows” at the IUNA (National University Institute of Arts).
He has published several articles on architectural lighting in specialized magazines and two books on theatrical lighting, published by the University of Buenos Aires (“La iluminación escénica”, Libros de Rojas) and INT (Instituto Nacional del Teatro, “La luz en el teatro, manual de iluminación”), with reedition by Editorial Atuel.
In lighting for architecture he has worked in the design of almost all areas (interiors, exteriors, offices, building complexes, houses, spaces dedicated to commercial and financial activity, public places, etc.), specializing in the design of shopping and entertainment centers, such as Playcenter, Showcenter, Shopping Abasto, Galerías Pacífico, Talleres Rosario, cinemas for the NAI chains, among others.
In January 2015 on his return to Buenos Aires after attending the inauguration in Paris of the International Year of Light, he stopped in Madrid and gave a lecture to the members and friends of the AAI. She was named a Visiting Fellow of the AAI.