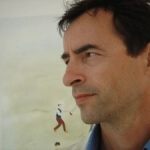 Categoría: Guest Partners
Back to partners

Technical Supervisor at the Théâtre du Silence, directed by Jacques Garnier and Brigitte Lefèvre, where he has designed the lighting for several productions. Pascal Mérat also works with Peter Brook at the Bouffes du Nord, where he designed the lighting for La tragédie de Carmen and Mahabharata. He has collaborated with stage directors including Klaus Michael Guber, Lluis Pasqual, Gilbert Deflo and Irina Brook. He works regularly with the Théâtre de l’Odéon, the Comédie Française, the Avignon Festival, Le Châtelet, La Scala and opera houses in Amsterdam, Bologna, Turin, Madrid and Catania. He has worked in Slovenia with Vito Taufer Matjaž Pogradec. Recent works include Un trait de L’esprit staged by Jeanne Moreau, Déjeuner chez Wittgenstein organized by Hans-Peter Klaus, Le concours de Maurice Béjart for the Paris Opera and Il viaggio a Reims, staged by Alain Maratrat at the Mariinsky Theatre.

In December 2015 during his stay at the Teatre Lliure in Barcelona on the occasion of his work in “King Lear” he was the protagonist of the XIV Meeting of Light and was named Guest Member of the AAI.