When: Thursday 26th of January from 16:00 Where: Teatro de la Abadía, José Luis Alonso Hall. C/Fernandez de los Ríos, 42 The A.A.I would like to invite you next Thursday 26th of January at the La Abadía Theatre to a new meeting: Miradas AAI VISUAL AND SCENIC CREATION OF A HOUSE IN ASIA with the […]
Read News
01.15.2017
By Adadi
Categories: AAI Looks | Activities | Articles | Featured 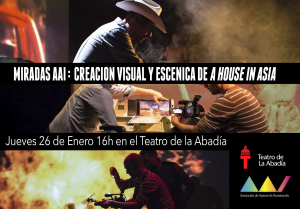 The A.A.I would like to invite you next Thursday 26th of January at the La Abadía Theatre to a new meeting: Miradas AAI VISUAL AND SCENIC CREATION OF A HOUSE IN ASIA with the presence of Alberto Barberá, Álex Serrano and Pau Palacios from Agrupación Sr.Serrano.

Through its trademark language (models, video projections, real time video manipulation and willing performers) Agrupación Señor Serrano presents a scenic western where reality and its copies are mixed, drawing a mercilessly pop portrait of the decade that followed 9/11, the seed of the 21st century. Come and see. http://www.teatroabadia.com/es/archivo/487/a-house-in-asia/

The activity will be developed in 3 parts:

– 16:30.- Presentation of the technical device (Isadora and d-light) and discussion with the audience. We focus on the aspects of lighting design, system integration and multimedia design. A technological session profile aimed at technicians, designers and stage creators alike.

– 19:00.- There will be one of the 3 performances that Agrupación Sr Serrano will do in the Abadía, if you are interested in seeing the complete show the Teatro de la Abadía offers us 10 tickets at 50% of the General Rate that will be distributed in strict order of registration (you need the registration that you have on this page)

Celebrate International Day of Light The video created with photos from our CAPTURE THE LIGHT campaign with images taken by our partners. To look, to observe, to capture, perhaps this is the basis of our craft to then recreate, compose, play, wrap, wrap and feel with...

Dance in search of light

The next AAI activity is here: "Dance in search of light " in collaboration with the María Pagés Choreographic Center. This activity consists of attending a rehearsal and subsequent meeting with María Pagés and El Arbi El Harti, directors of the project"De...

Introductory course on programming with TouchDesigner

AAI has organized, in collaboration with MasterD Audiovisual School, a training activity that we believe will be of interest to you. This is an INTRODUCTION COURSE TO VISUAL PROGRAMMING WITH TouchDesigner taught by our partner, designer and multimedia artist Azael...